Got that Friday feeling? Here’s our Friday team! Click on the name of a show for more information and to access Listen Again.

TotallyTabi is our lively weekly magazine show presented by Tabi Mudaliar and broadcast every Friday from 12 – 2pm.

Tabi is our reigning Disco Queen but her musical tastes are wide so get ready to listen to all sorts. Tabi loves disco, rock, R&B, soul, funk, pop, and dance music, so you’re going to be treated to great tunes from the 50’s right through to present day. On occasion she’ll feature an album of the week or a musical theme too.

The magazine element of Tabi’s show brings us the latest news from the very best of the arts & culture scene, here is Dumfries and Galloway and around Scotland. Tabi talks about movies, tv, new music, gigs, travel, literature, theatre, entertainment, fuelled by coffee and cake. Two hours listening to TotallyTabi is like hanging out with her for a coffee and a blether.

One thing is for sure, there’s never be dull on Friday afternoons here on Alive 107.3! 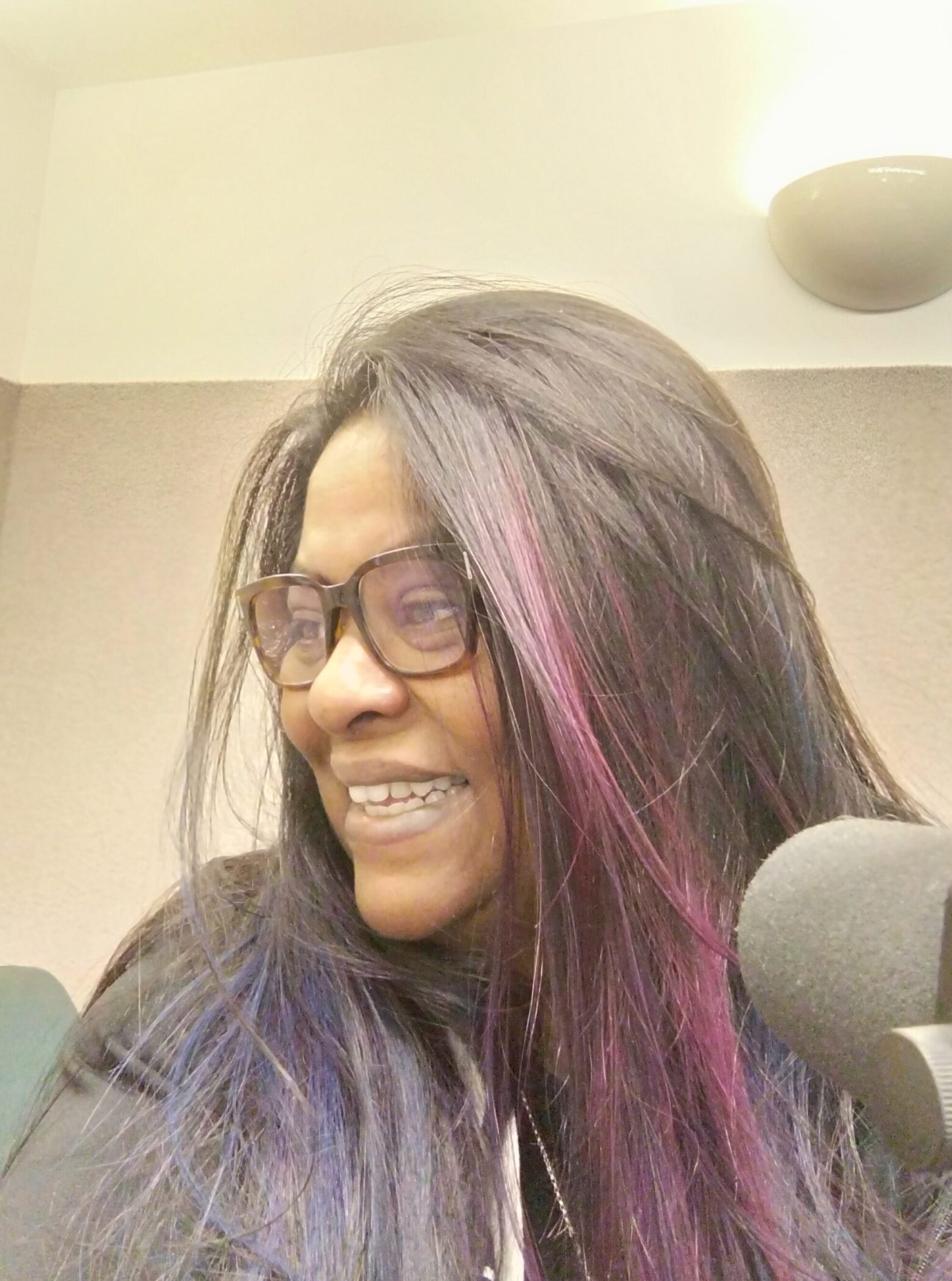 As well as presenting our weekly magazine radio show, ‘TotallyTabi’ on Alive 107.3fm, Tabi is a writer and radio broadcast journalist.  Tabi is a Trustee for Alive Community Radio SCIO, a Director of the South West Media Factory CIC and enjoys a career as a Creative Producer producing film, video, digital media, cultural events, training, radio, and podcasts.

In addition to her own creative writing, she has broadcast for BBC Radio Scotland, and had her work published in various literary magazines and blogs. Tabi is thrilled to be bringing her production skills and creative talents as well her contacts in the arts and cultural sectors to her second feature film project. Tabi’s first book is also nearing completion.

Mixed Bag Of Rock is a show that plays all genres of rock, punk rock, classic rock, soft rock right up too folk rock, there is always a bit of canter and shout outs from Andy.

Andrew was born in North Wales and when he was six his family moved back to Gretna.

Being brought up in the late sixties and seventies a wide range of music was heard and as he got older he started listening more to what became rock/ heavy rock music.

From the music of the early black sabbath and deep purple to AC/DC, nothing was left unheard.

Radio was always a passion after tuning into radio Luxembourg and later Atlantic 252.

When the Internet came about, Andrew joined some friends and presented a late show on the Internet in the early 2000 with a station called QTFM, he was hooked and later on he blended all the different types of rock and his show Mixed Bag Of Rock was born.

For more than 200 shows, Aymer Nelson has brought an eclectic blend of the songs that made rock n roll possible and the heaviest music around to Dumfries.

Combining regular interviews with some of rocks biggest names, brand new releases as they drop and able to place punk, blues, and metal seamlessly alongside each other, Rock n Roll Rebellion always has something to blow the cobwebs from all ears.

For more than 25 years, Aymer Nelson has been in and around the music and entertainment industry.

In addition to bringing the low-end frequencies to many bands, which he continues to do today, he has filled every job in bringing live shows to the stage from stage managing festivals, running lights/sound, set building to just loading and unloading equipment from trucks as well as PR and writing for music magazines.

He has now turned to work in an education setting which has included helping drama students through nationals and highers.

He aims to continue bringing the biggest names to Alive 107.3 with plenty lined up in the coming weeks.